The last saturday, 2nd of october, the Basque Association of Draughts and Strategic Games organized the I. Basque Country Monopoly Championship. We gathered 8 players of the association and we play 4 matches in 2 rounds. We played the classic game and we decide to play two rounds of 75 minutes each one.  The winner was the player who mantain more money after this time. Finally the winner was Egoitz but Jon Ander player very well he was very close in the final of Egoitz. The difference between the two was very small. Luis and Daniel also played very well in the final.

These were the results:

Last Classification of the I. Basque Country Monopoly Championship 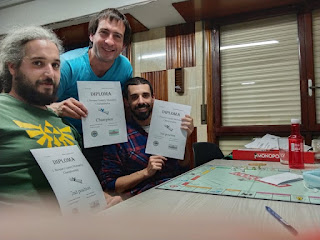 A new ranking of Celtic!

This year we will start a new ranking after 4 players playing. The last 1 of february we met 5 players in the bar of Lord Chaplin, Santutxu (Bilbao, Basque Coutnry) to play to Celtic! En april as a consequence of the coronavirus crisis we have amde some videocalls to paly to Celtic! At home we have played also some matches.